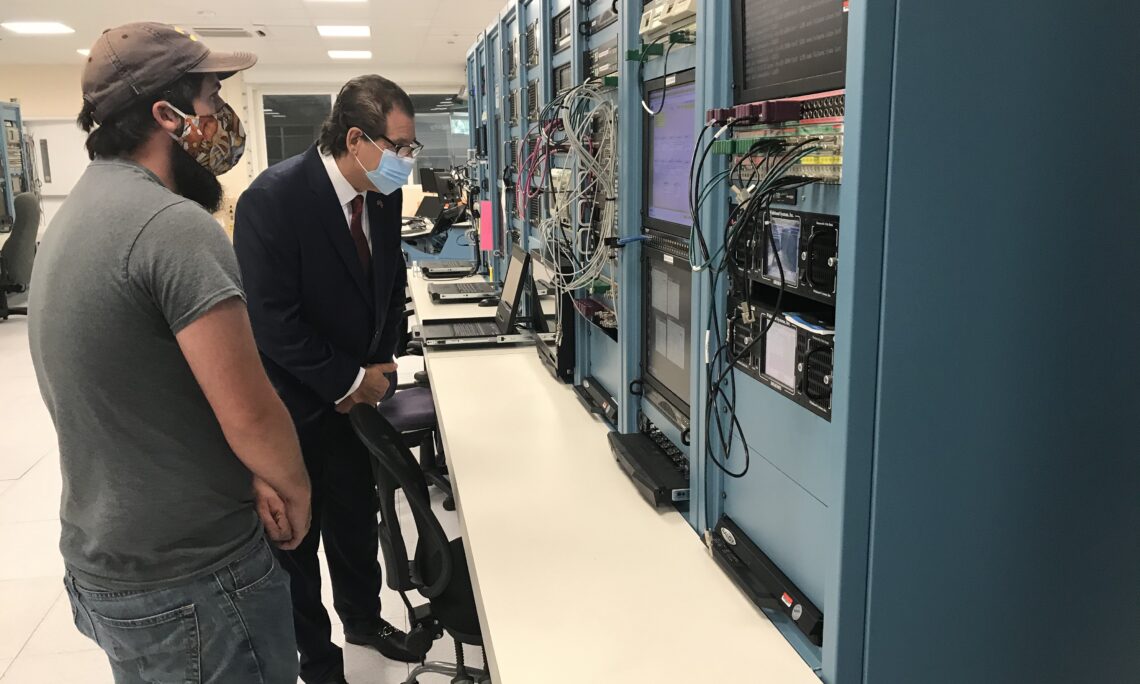 U.S. Consul General Lee Rizzuto visited the National Aeronautics and Space Administration’s (NASA) Bermuda Tracking Station on Cooper’s Island for the first time to commemorate the 51st anniversary of Apollo 11 – the spaceflight that first landed humans on the Moon – and the 30th anniversary year of the Hubble Space Telescope. Hubble has expanded our awareness of the cosmos and knowledge of Magellanic galaxies 163,000 miles away with stars each 10 and 20 times more massive than our sun. The Hubble telescope also captured the Blue Nebula Mammouth Star 200,000 times brighter than our sun and continues to inspire space exploration.

Mr. Andrew Muender, NASA’s Telemetry Technician from the Wallops Flight Facility in Wallops, Virginia, was onsite to host a tour of the facility, providing information about how the station is operated by a team of technicians when they are available to visit the island and remotely from Wallops. He also discussed recent rocket launch missions and the important role Bermuda plays in providing telemetry, radar and command and control services for space launch activities. NASA’s Chief of the Range and Mission Management Office, Shannon Fitzpatrick, joined the discussion virtually to explain how the facility operates, future missions, Bermuda’s strategic support and how the tracking station will support NASA’s Space Launch System which will be instrumental in landing the first woman and next man on the Moon by 2024.

“Today marks a significant achievement in history. After 51 years, the extraordinary accomplishment of the Apollo 11 Moon landing still brings excitement after astronauts Neil Armstrong and Buzz Aldrin were the first humans to walk on the Moon. Bermuda’s relationship with NASA continues to be an important asset to the space industry and is another example of Bermuda’s significant relationship with the United States,” says U.S. Consul General Lee Rizzuto.

Apollo 11 launched from Cape Kennedy on July 16, 1969, carrying Commander Neil Armstrong, Command Module Pilot Michael Collins and Lunar Module Pilot Edwin “Buzz” Aldrin into an initial Earth-orbit of 114 by 116 miles. An estimated 650 million people watched Armstrong’s televised image and heard his voice describe the event as he took “…one small step for a man, one giant leap for mankind” on July 20, 1969.

The Bermuda Tracking Station, operated by NASA’s Wallops Flight Facility, most recently supported the first U.S. Space Force launch from Wallops in support of a mission for the National Reconnaissance Office. The station provides ongoing support for cargo resupply launches to the International Space Station, and most notably, the tracking station will support launches of NASA’s Space Launch System on missions to the Moon as part of NASA’s Artemis program.

The Artemis program is NASA’s next step in human exploration. The program is building on NASA’s ongoing work in low-Earth orbit as a means to pave the way to the Moon and then on to Mars. Through Artemis, NASA aims to see the first woman and next man step foot on the Moon by 2024 as well as to establish sustainable exploration of the Moon by 2028 with commercial and international partners.

“My predecessor helped to initiate the re-opening of the facility in 2018 which was supported by the Government of Bermuda. I look forward to providing opportunities where students and visitors can visit to learn about Bermuda’s history with the agency and the future of human spaceflight. I hope to inspire our youth to pursue a career in STEM and to broaden their scope of possibilities within the space industry. Maybe we will inspire a future astronaut!” added Consul General Rizzuto.

Bermuda’s tracking station assists NASA by monitoring current and future missions, including the use of launch vehicles, which are designed to deliver satellites and rockets into orbit and supplies to the International Space Station. Bermuda has been a long-time partner with NASA dating back to the Mercury Project and the Apollo lunar program in the1960s, when Bermuda hosted a radar tracking station that monitored the progress of spacecraft lifting off from Cape Canaveral, Florida, in the same location as the new facility. Historically, Bermuda has formed an important part of NASA’s worldwide network of tracking and data stations.