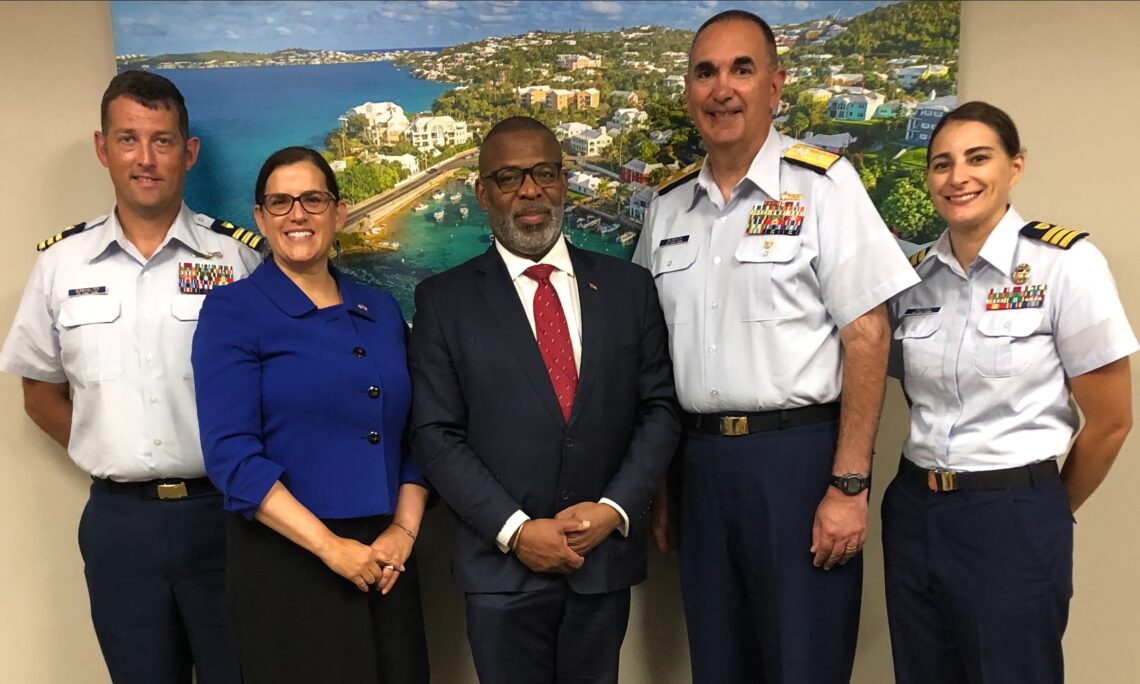 Rear Adm. Gilreath’s visit to Hamilton is a continuation of the Fifth Coast Guard District’s commitment to the strong partnership between the U.S. Coast Guard and Bermuda in combatting Illegal, Unreported and Unregulated (IUU) fishing in the Atlantic, in particular in and around the United States and Bermudian EEZs.  During his visit, Rear Admiral Gilreath had meetings with Acting Governor Tom Oppenheim, Deputy Premier Walter Roban and local security partners.

The visit served as a follow up to successful joint operations that occurred in the Spring of 2022, as well as to establish best practices for future operations.

Rear Admiral Gilreath remarked, “We appreciate the partnership established with Bermuda and look forward to future operations together.”  The U.S. Coast Guard lauded the collaboration that occurred between the U.S. and Bermuda in the past and is looking forward to expanding the key strategic partnership in the Atlantic basin for combatting IUU Fishing, as well as operating together in other Search and Rescue, Law Enforcement and Environmental protection matters.

Deputy Premier Walter Roban thanked Rear Admiral Gilreath for the strong collaboration between Bermuda and the U.S. Coast Guard, as Bermuda looks to protect and sustainably develop its EEZ.  Roban welcomed the support from the U.S. Coast Guard and highlighted what he called the “virtually impenetrable” relationship between the U.S. and Bermuda.

U.S. Consul General Karen Grissette noted, “I am pleased to continue close security cooperation between the U.S. Coast Guard and Bermuda.  This important relationship demonstrates our shared security interests.”  Highlighting this visit, she noted, “On behalf of the United States government, I thank all of our partners for engaging in fruitful discussion to evaluate and operational logistics and future operations.”

This area spans 1.4 million square miles of oceans, bays, and rivers, several mid-Atlantic ports, the largest U.S. Naval Base in the world, and our National Capitol Region.

Prior to assuming Command of the Fifth District, RDML Gilreath served as Commander, Personnel Service Center, in Washington, DC.  In this capacity, he was responsible for executing the Coast Guard’s human resource policies by recruiting, accessing, assigning, developing careers, maintaining well-being, compensating, separating, and retiring the nearly 45,000 members of the active duty and reserve workforces.